Yrs Performing:  All my 50 something life

Mike has been performing virtually all his life.  He began with piano at the age of 5 and evolved to include playing guitar in the early 60’s.  He performed with the Southwest Texas State University Jazz Ensemble under the direction of Jim Hall for four years.   His memorable performances were playing for two U.S. Presidents – Presidents Richard Nixon and later George W. Bush.  He has run and directed his own band since the age of 13.

Beginning a lifetime passion for music, Gregg started piano lessons just before turning eight, and grew up playing for various church and school groups. As a teenager he became interested in the growing electronic music field, building his own synthesizers, and writing and recording his own music. He continued his music education at Texas State University, earning a degree in Piano Performance with an emphasis in Composition in 1983. He has been playing piano and keyboards solo and with various bands since the early 80’s and continues to write and record in his private studio. He has also composed the musical scores for several short films. 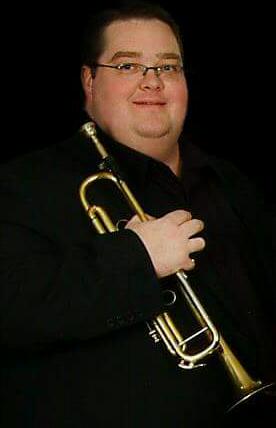 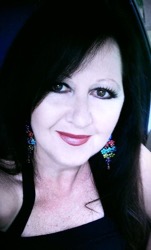 Born and raised in the Midwest, Laura moved to Texas over twenty years ago to get “a real job” after singing her way through High School and College.  However, upon realizing the music business was so promising in Austin, she quickly made her mark as one of the most sought after singers in the Austin area.  Her credits include Zachary Scott Theatre: Always, Patsy Cline, Beehive’s Rockin’ Christmas Party (for which she was nominated for a B. Iden Payne Award), Beehive,  Soul Sisters, and most recently in A Christmas Carol.   For nine years, she was a member of the popular Texas show band “Rotel and the Hot Tomatoes” and was personally invited to perform at the White House and other Washington DC events for President Bush on several occasions. She also performs (formerly and currently) with a long list of Austin bands, including Jumpstart.  Additional credits include studio projects for Walt Disney Records (including the Grammy nominated “Bugs Life Sing-a-Long”), “Barbie” by Mattel, Joe Scruggs, Bonnie Raitt, Jennifer Warnes and many more.  She has also performed on numerous radio and television commercials on the local and national level, including the long running jingle for “Thundercloud Subs”.  Laura was also a member of the “Pop Hits of Broadway” which showcased in Austin and Nashville in 2014.  Film credits include a small role in the HBO series “The Left Overs.”

Laura is grateful for every single day!

James Downing, born and raised in Austin, Texas has been performing on stage since the 5th grade.  From elementary school through his college career, he has performed in some of the most iconic musicals.  He has been an active member of both school and private coral groups as well.

James began his professional musical career in the mid 90’s as the drummer and backing vocalist for the Austin band The Watsons, eventually moving to the guitar and forming his own original band, Pleasurecraft.  After a successful 7-year run with the band, James eventually moved back to playing drums and sharing lead vocals with A Band Named Sue, that disbanded in the spring of 2007.  James continued playing drums with Shelly Coe, daughter the daughter of David Allen Coe, and up and coming country recording artist Bill Rice.  Completing a heavy travel schedule with Bill, James decided to form his own traditional Country cover band.  James currently lives in Austin, Texas with his Wife Amber and three children, Tristan, Genevieve and Aria.

Syd Polk has played saxophone and woodwinds for 30 years in Houston, the San Francisco Bay Area, and Austin. He has appearances with Melissa Manchester, Peabo Bryson, Roberta Flack, Aaron Neville, the Smothers Brothers, and John Raitt, among others. He has been a member of Jumpstart for five years, playing and arranging charts for the Jumpstart Horns. Syd attended the High School for the Performing and Visual Arts in Houston, the University of Miami, and Rice University. 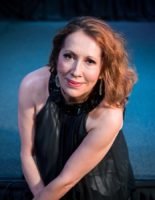 Performing live in the Austin music scene for almost 25 years, Pilar has been a guest performer with high profile cover bands in the Austin area.  “I started sitting in with blues bands because everyone who was playing knew the standards”. After 8 & 1/2 years with Rotel and The Hot Tomatoes (as the Brunette Tomato and lead choreographer), she joined Wallstreet, where she’s been a commanding lead presence for 9 years. It was Laura Benedict who recruited her for Jumpstart. “We’re partners in crime … we’ve been performing together for 20 years … it’s more fun than ever!” 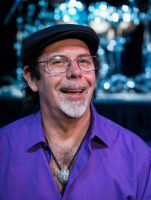 Bruce Wayne received his Bachelor of Music in Percussion Performance from Texas State University (Formerly Southwest Texas State University) in 1984, and has been a working professional musician for more than forty-six years. He has performed in a variety of musical styles including Rock, Jazz, Rhythm and Blues, Soul, Country, and Latin. He has also had experience as a Classical Percussionist and has performed in Broadway style musicals. His performing credits include warming up for such headliners as The Charlie Daniels Band and Perfect Strangers. He has appeared on television and the Zilker Park Jazz Festival performing with the Contemporary Jazz group Freefall. Besides maintaining a private percussion studio over the years, he also teaches percussion at the middle school and high school levels. He is currently the owner of Music Retreat at Willow Creek, a private music school located in San Marcos, TX. He performs on drum set regularly in a variety of musical situations including Jumpstart, Bat’s Jazz Trio, The Blue Channel Jazz Quartet, The Doug Anthony Jazz Trio, various rock and country bands, and recording sessions. He also does free lance percussion work on mallets and tympani. He is also the owner of Bat Cave Productions, a project-recording studio. 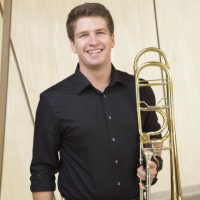 An avid educator and performer, Steven Vogel has been an active force in the musical community of central Texas since his arrival in 2011. Known for his versatility and vibrant sound, Steven has enjoyed numerous successes in the past several years, including a number of awards for both chamber and solo performances. Steven has been recognized by The International Trombone Association as a finalist for the Larry Weihe Tenor Trombone Competition, as well receiving honors as a founding member of the Somos Trombone Quartet. He has been a finalist in several concerto competitions, and recently served as the Trombone Faculty for The Luzerne Music Center in Lake Luzerne, NY. Steven has been performing with the Hill Country Brass since 2014, and is currently finishing a Masters Degree in Trombone Performance at The University of Texas in Austin. 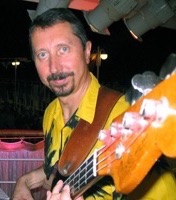 Andrzej’s love for music began as a child in Torun, Poland.  At the age of five his parents discovered he could play music by ear.  His parents quickly enrolled him at the Arthur Rubinstein Music School in Bydgoszcz, Poland where he studied upright bass, piano and drums.  This was the beginning of his life-long passion.   Upon graduation he embarked on a five year career as a studio musician specializing in theater and television instrumental recordings.

Andrzej has toured with multiple groups and music pioneers throughout Europe and the Americas.  He has played with great artists including the Supremes, Cleo Laine, Sir John Dankworth and Donna McKechnie, and a Broadway series tour with Adrian Zmed and his ‘In Concert” series.  His body of work has him in high demand on both sides of the pond, as well as from five-star luxury cruise lines including Silversea Cruises, Cunard, and Princess Cruises.

Andrzej has lived in Vienna, Oslo and Hamburg.  But his move to Austin was indirectly related to music.  It was in the “Music Capital of the World” where he met his future wife, an Austinite, at one of his performances in 2004. He relocated to Austin in 2011.

Art Martinez has been performing in Austin since 2002.  Music has been a part of his entire life, for he learned to play the piano at the age of 3 from his older brother.  He started the saxophone as a middle school student in his hometown of Victoria, TX and pursued the instrument throughout his high school and college careers.  Along the way, he has acquired the skills of performing on other instruments such as flute, clarinet, trumpet, euphonium, and bass guitar.  Art is currently employed as a music educator for the Austin Independent School District.  He holds a Bachelors and Masters Degree from Texas State University – San Marcos, TX.